Elina G. Hamilton and Michael Scott Cuthbert together with their parents request your company as they celebrate the beginning of their life together at a Wedding in Cambridge, Massachusetts at the Eero Saarinen Chapel at M.I.T. on Saturday 29 September 2018. A reception at the Harvard Faculty Club will follow 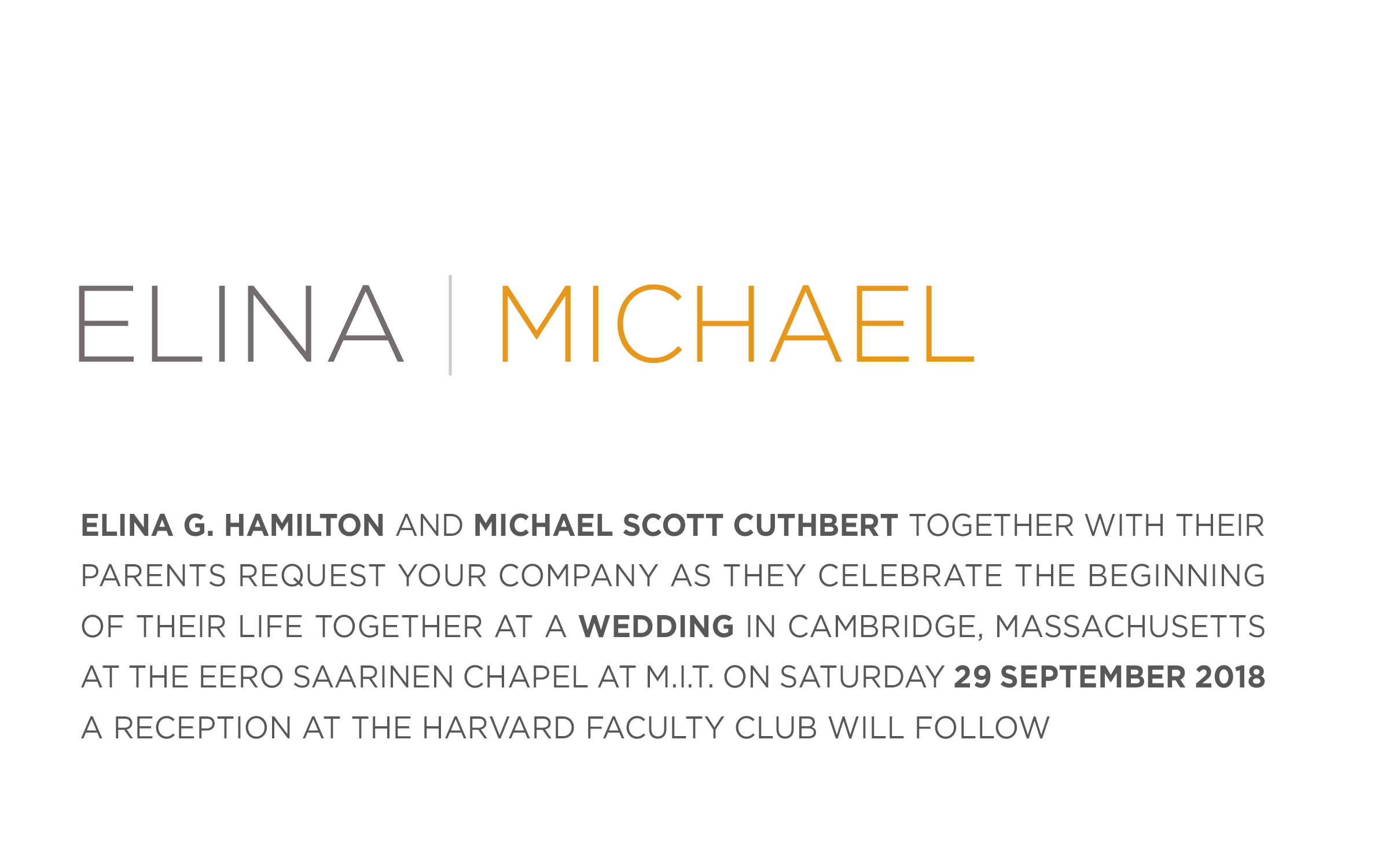 Elina G. Hamilton's maternal grandparents moved to Japan in the 1950s as missionaries. Her grandmother, Eleanor, was one of the first to teach at the Yokohama International School and raised three daughters in the Yokohama region.

Her mother, Ronaele, inspired no doubt by her own mother's teaching, studied to become a teacher herself. After completeing college, she returned to Japan where she taught elementary school at a language school in Karuizawa. It was here where her mother met her father, Daniel, who was learning Japanese. They were married in Karuizawa in 1983.

Their first-born daughter, Elina grew up in the mountains of Nagano. She attended Japanese School and learned to love the beauty of this culture deeply. She won many school awards for her Japanese calligraphy and often came home with perfect scores on her Kanji tests. Spelling, on the other hand, was a little less successful.

At a young age, she learned to play the piano and by the age of 14. she spent most of her spare hours in front of her instrument. Her siblings will remember how she would be too busy to play with them because "she needed to practice."

Alongside her music making, she spent many happy hours working at café Cembalo where she learned the culinary skills of French cooking. Food prepared with their natural and authentic flavors is still something she enjoys thinking through when cooking a good meal.

Deciding to study music in college, she moved to beautiful Portland, OR where she received her Bachelor of Music degree in piano performance. It was not long before she knew that four years of education would be too short for acquiring the knowledge she desired.

To attend graduate school, she moved to Wales where, after completing her master’s degree, she was awarded a scholarship to pursue her Ph.D. in medieval music theory.

She is currently Assistant Professor at the Boston Conservatory at Berklee.

Michael Scott Cuthbert grew up in Escondido in the suburbs of San Diego, California. His parents, David and Kimiko met in Okinawa where Kimiko was a nurse and and David was in the U.S. Navy during the vietnam war. They were married in 1971 and happily raised a family and built a home together until his mother's untimely death in 2015.

Being naturally unable to walk in a straight line, Michael was encouraged by his mom to join marching band in jr. high, where he chose to play the clarinet (to meet girls). Music stuck with him: he attended Harvard intending not to continue in music, but eventually gave in and ended up staying for twelve years to do a Ph.D. in medieval italian music. His choice of research topics forced him to endure many a summer and two full years traveling through the hills of tuscany, riding a vespa in the streets of rome, and suffering many long italian meals with dear friends.

During school he paid his bills by being a computer programmer, a skill he picked up by being jealous of his older brother's ability to do so, and he's managed to combine a love of music and a love of computers in his work.

After graduating, he stayed in the area to teach, and over the course of a “temporary” twenty-three year sojourn in Boston, he's learned to appreciate the autumn, tolerate the snow, ignore the traffic, and adjust his sleep schedule to still watch the Padres lose.

he is currently Associate Professor of Music and director of digital humanities at MIT.

in 2009 at a conference on Medieval and Renaissance music in Utrecht, Netherlands, a mutual friend alerted Michael that there was a first-time attendee who spoke fluent Japanese and was beautiful. Elina recalls being approached by a dashing professor who warmly welcomed her into the field...perhaps overly friendly?

The next summer they ended up secluded together in northern Italy at Neustift—the “New Monastery,” which will soon celebrate its 900th birthday. Over the course of a week of hearing papers, drinking wine, and bathing in the monastic pool together, their friendship deepened knowing that such conference encounters would continue the rest of their lives. (When Michael said that, it did creep Elina out a bit).

They kept running into each other, giving papers at conferences in Barcelona, Princeton, Certaldo in central Italy, and Southampton in England. Each time the hours of conversation lengthened, the number of glasses of wine increased, and the parting hug lasted just a bit longer than the time before. Between conferences, Facebook allowed them to stay in touch (and to spy on each other), despite the 3000 miles separating them.

In 2013 Elina gave a talk at MIT. While she was in Boston they took a lengthy bike ride along the Charles River, had hot chocolate at the Frog Pond on the Common, and finally came to realize that text messages and Facebook likes weren't going to be enough for them.

Michael came to Wales that New Years Eve and together he and Elina packed up her belongings to move to be together in Boston. Trips together over the next three years to Brussels, Vancouver, West Virigina, Prague, the Grand Canyon, and finally Japan, along with daily meals together, bad movies, and an ever-intertwining web of dear friends, made them realize they wanted to share the rest of their lives together.

Over sushi and sake, Michael proposed on Elina’s 33rd birthday, and she said yes.

the wedding will take place at two o'clock at the MIT Chapel at 48 massachusetts avenue in cambridge.


their commitment to each other will be officiated by M. T. Anderson.

out of the equal love they feel for so many, the bride and groom will not be having attendants.

the reception will be held at the Harvard Faculty Club beginning at 5:30 pm.

elina and michael will accompany guests from MIT to Harvard riding the MBTA red line subway.

pre-wedding and post-reception events for out of town guests: for those traveling from afar a Clambake will take place at Summer Shack at 50 Dalton Street in boston proper. at 5:30pm friday. mbta: green line to hynes convention center. (note: not in alewife as previously announced)

on sunday a lunch and candelpin bowling event will take place at sacco's flatbread company at 45 Day Street, Somerville at 11am. mbta: red line to davis square.

the MIT campus is located 4 miles from Logan Airport. due to the difficulty of parking and the extensive subway and uber availability we recommend not renting cars. hotel information at this link. a map of events is available here.

We are honored that you are part of our lives and your attendance and/or best wishes are all the gifts we need to begin our lives together. We also realize that getting to Boston and staying there for a weekend can put a strain on any budget; therefore we hope that no one will feel any obligation to give any gift except their love on this occasion.

We do, however, know that the thoughtfulness you have given us in our lives does sometimes extend to wishing to offer a tangible token at this moment. As our house, like many Boston houses, is very small (1,000 sq. ft.), we greatly appreciate physically small items that have many uses or can be consumed. We have created a list of some gifts we could use immediately below:

We also recognize that not everyone is as lucky as we are and if you were moved instead to support one of these local charities, it would be as great an honor as if we received the support ourselves:

We hope that you will be able to join us in the festivities. The Favor of your Response is requested by august.

Copyright © 2017–18, Elina and Myke (CC-SA-NC). Harvard and MIT images do not imply endorsement from Harvard University or the Massachusetts Institute of Technology. Wedding ring image by Franc from the Noun Project (CC).